Ugandans are slowly catching up with the internet craze of these days. There are several startups that are emerging and this only shows Ugandans have finally woken up and also realized that there is opportunity out there online. So, as I was doing my rounds on the internet, I came across this eye catching website called EliteHive. For starters, it looks beautiful and no doubt it was named Elite.

Elitehive is a Ugandan social network that has a little twist to the way things are done. Founded by Ugandans who go by the names of Micheal Ntabazi, who is the founder, chairman and lead front end developer and Julius Gyaviira Sseremba who is the co-founder and CEO. At first sight, one might think some American developers did the work but when you go to the about page, that is when you realize Uganda has potential.

It is almost has no difference with Facebook so getting around it was easy for me, thus making it the next Ugandan Facebook. The first time you log in, there is an intro which really helped highlight the features of the social network and honestly, this has proved to be very helpful. The other thing I realised was that the people on the network so far are mainly Ugandans but that is soon changing, I am quite sure of that.

For those of you who want to build the next Facebook, this is an inspiration and starting point and truly this pushes Uganda forward in the internet presence sense. The founders seem to be open minded since they provide their email addresses and for sure those emails work because I sent them emails and I am sure those emails reached their destinations 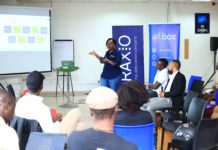