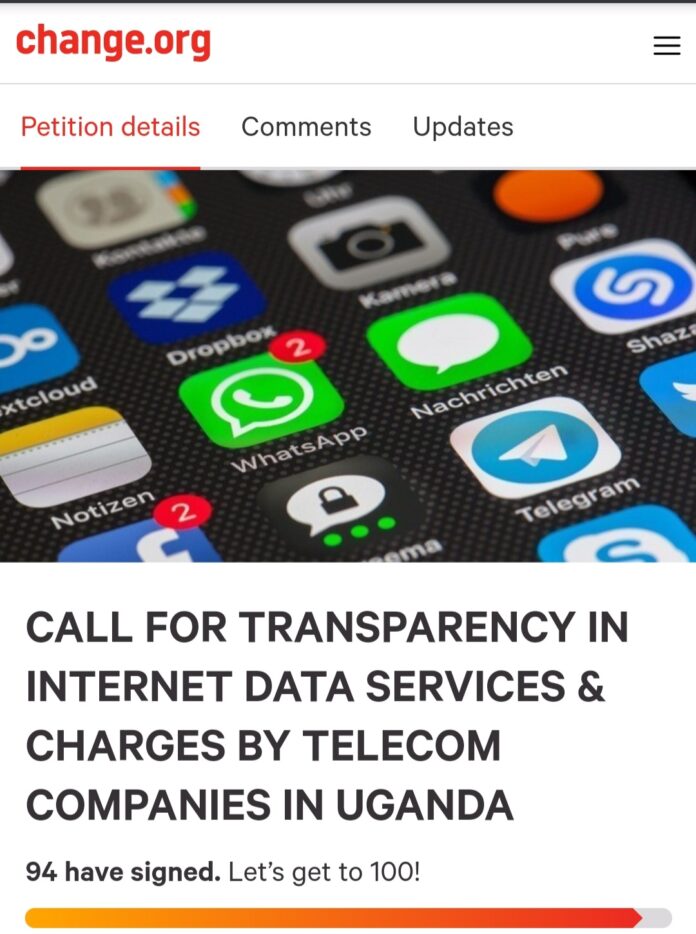 Not less than 24 hours had passed before the intended target of 100 signatures was almost achieved in a petition that was initiated by the Uganda Consortium on Corporate Accountability (UCCA).

By press time, the petition has secured 94 signatures that are jointly calling for transparency of internet data services and charges by telecommunication companies in Uganda. The companies specifically targeted or mentioned in the petition include Airtel, MTN and Africell “among others”.

In the description of the petition, UCCA references the newly passed Excise Duty (Amendment), 2021, an amendment that removed the controversial Over the Top Tax (OTT), while introducing a new 12% tax.

“Recently, the Government of Uganda introduced a new 12% tax on the price of internet data”, the petition reads, and as a result, “…many Ugandan internet consumers have noticed a spike in the rate at which their internet data bundles run out”.

While the companies are required to impose the tax in compliance with the legal obligations, the companies, for example Airtel, have released statements to show that they would only impose the tax on business packages, as they consume the burden on the rest of the packages, (except for UTL that wholly imposed the tax on all internet data purchases).

The fear of the “petitioner” and the signatories to the petition is that there are repercussions on the internet data of users from the companies that have opted to levy the tax selectively or not made any statement regarding the implementation of the tax.

“(The implementation of the tax) suggests that the telecom companies are supplying their consumers with less data volumes than they are purporting to do, in order to offset the cost of the new tax”.

The petitioner believes that the above allegations are unlawful and are an abuse of the consumer protection laws of Uganda and are using the signatures for the petition to “call(s) upon the Uganda Communications Commission”(UCC), the regulator of telecommunication companies in Uganda to “investigate the activities, services and charges of these companies with the supply of internet data volumes, and to also compel them to come out” clearly on the way they are implementing the new law.

It would also be able to enable consumers to know how the money they pay is being used, and to be able to make “well-informed decisions” on the competitive options available for data.

There is growing support for the petition with people signing the petition expressing how “It’s critical that something gets done before it runs out of hand”, as corruption has already killed Ugandans more than it has for COVID – 19, the companies just got greedier, data being abnormal since 1st Jul 2021 among other feelings.