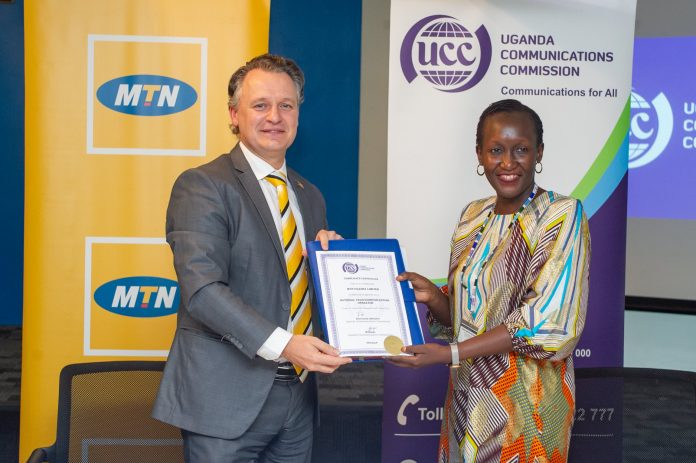 The Uganda Communications Commission (UCC) last year released renewal license regulations for telecommunications companies in Uganda which included the compulsory listing of 20% of shares of the said companies in the first 2 years of their license renewal.

Friday last week, saw MTN Uganda (MTN) and UCC sign a license renewal agreement for a period of 12 years commencing 1st July 2020 after paying a total of USD 100 million approximately UGX. 371.5 billion which the MTN said to have paid in full for the license.

However, among the conditions stated in the agreement signed included the requirement that MTN complies with the sector policy, regulations and guidelines requiring the listing of a portion of its shares on the Uganda Security exchange. The portion was identified by the regulator UCC as 20% of its ownership, and according to Bloomberg, local ownership in the company from Ugandans only stands at 4%.

To have MTN launch an initial public offering (IPO), will see that ownership stake of Ugandans increase, and the same will be for transparency in the company given part of it will be in public domain.

Below is the summary of the other terms and conditions that were agreed upon by UCC and MTN. However, some of these will also extend to other telecommunication companies in Uganda, depending on which one next applies for a license renewal upon expiry. These conditions were also included in the national broadband policy that the Regulator (UCC) released in 2018.

The other terms and conditions include that MTN ensures thats its network extends to, and that its services are available in at least 90% of the geographical boundary of Uganda within five years from the date of the license, that it does not deny access to licensed services to any subscriber except for non – payment of fees or any other just cause, it ensures that its services meet the UCC’s quality of service standards and other standards as the licensor shall determine from time to time and that it also complies with all the laws, regulations, guidelines and standards issued by the government of Uganda on health, safety and environment protection.

Further, that MTN shall provide services that are adaptable to persons with disabilities across its network, ensure that its equipment, facilities, or systems do not damage, interfere or in any way harm the installations, facilities or operations of other licensees, ensure and maintain the confidentiality of all communications that it may obtain in the course of providing a service to a customer or interconnecting to a public network or in the execution of its business.

MTN is also required to further interconnect its systems with national, public or private telecommunication systems or other licensed operators to deliver locally originated traffic through interconnection agreements, which shall be approved upon by the parties, share its infrastructure with other requesting licensees in designated areas as provided by the UCC Act, Regulations, Government Policies, guidelines and directives, comply with the Act, regulations made under that act, standards, directives and guidelines issued by UCC in the public interest, including by not limited to national development, consumer protection, environment protection, disaster relief services and security of persons and infrastructure.

And finally, MTN is authorized a non – exclusivity, to establish, install, operate, maintain lease, and sale telecommunications system and to provide telecommunication services and make available network infrastructure systems to other licensed operators and authorized persons in Uganda.