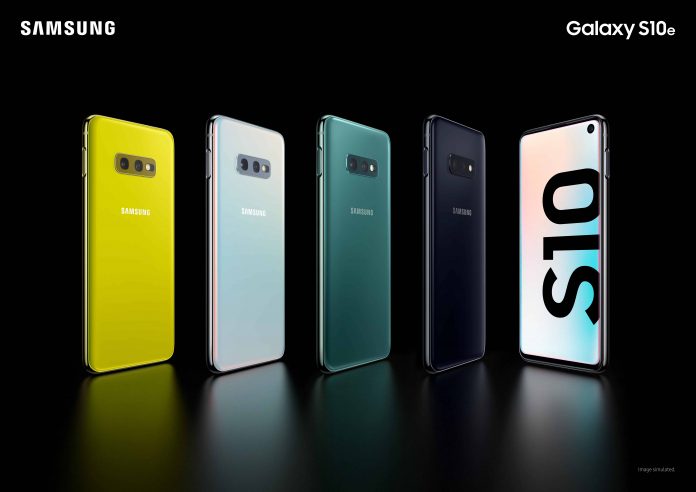 The 3 smartphones in variations of s10, s10 plus and the s10e, have a full screen display a.k.a the Infinity-O display, with a punch hole for a front facing camera that was first debuted on the Huawei Honor View20, last month, which is in effect being popularized, if you had known about it.

Speaking of screen, the s10 and s10 plus have an in-screen finger print sensor as opposed to the side mounted sensor on the s10e variant.

They are like the iPhone X that came in 3 variants last year with the iPhone X, XS MAX and the XR. The s10 is the main device, followed by the s10plus. The s10e just like the s10e is the cheaper of the s10 series.

The devices are powered with the Samsung Exynos 9820 and snapdragon 855, some of the first few phones to be released with the latest Qualcomm chipset which is said to be 25% faster than the previous generation 845. The same chipset is already running in the Xiaomi Mi 9 that was launched just a day after the s10 gallant launch.

With the Android 9.0 pre installed and a new customized Samsung skin, the One UI for the s10 devices, useability is superb. Samsung with these 3 has maintained 3.5mm headphone jack that seems to be phasing out in the latest flagships such as the iPhone X, the Mi A2, among others.

The 3 devices come with a support of the wireless charging technology, and a reverse wireless charging, with a power share ability that also appears on the Huawei Mate 20 pro, allowing the devices to wirelessly charge other phones or the Samsung Galaxy Buds. This specification will not be able to work when the phone is under 30% battery, selfishly reserving a percentage for the device itself.

They all come with an all powerful CPU, Octa-core CPU with up to 2×2.8GHz and front facing cameras with a support for slow-mo video and 4K video recording.

Special features on the devices.

This one is the bigger for the flagships with a 6.3 inch screen display, and is also styled the limited edition. It has an 87.5% body to screen ratio, and the biggest battery of 4,100 mAh. It is also the one to come with a two camera set up for the selfie with 10MP and 8MP.

What makes this device very special is that it comes with 12GB ram and an internal storage of 1TB almost assuring you with limitless space for your files and apps installations.

The price for the s10 is $899 around UGX. 3, 299, 000, which is without the huge shipping taxes that Uganda imposes on imports that cross the border, so expect an increase of about 20% for each of the handsets.

The devices all are ready for pre-orders and shipping globally starts on the 7th March 2019.

The Samsung s10 5G and the folding will phone be launching later on.